July 19, 2017
For July, the Tarot Rebels Blog Hop focuses on the task of reading with a deck you've not previously used before.

I had a few sitting around, actually, and I felt inspired to try each in turn. The exercise became quite revealing, both of the decks and of me as a reader and toward what sorts of decks I intuitively gravitate. For each deck, I employed a different spread, in each case one I'd not used previously. In hindsight, it's entirely plausible this created too many variables and adversely influenced my perceptions of the decks.

My first attempt employed Place's Sevenfold Mystery. I'd acquired it for reasons wholly unrelated to actually using it, much like my Hermetic and Azathoth decks. Despite that, I've had others tell me it's a solid performer for them, so I decided to give it a chance.

The spread is called Spiritual Tasks, but to be perfectly blunt here, I struggled to take the interpretation seriously because it felt like I was looking at a bunch of clip art. The vibrant colors and lack of clutter were nice, but the images just seemed to lack depth, development. I got no impression of emotional investment. It felt cold and harsh, quiescent and unresponsive. The reading itself seemed to skim the surface, pick out the blatantly obvious themes, and delve no deeper.

This deck strikes me as terribly simple. It's one I'll likely reserve for reading for others, which I do quite rarely. This bed was too hard.


The Fountain Tarot was my second attempt. Acquired at a steep discount on the whim of another reader's profound delight, it got stashed away as a collection piece (and no, I'm not a serious collector), without me even riffling through the deck.

I chose a spread called Council of Thirteen, and to focus it I asked, "what advice do my ancestors have to offer me?"

This deck is the spectrum opposite of the Sevenfold both in appearance and imagery content. It has a watercolor feel, very soft and pliant in a way that suggests it's capable of going deeper if you want to, that you're in control of how deep you dive. In attempting to interpret, however, I got distracted and lost in the softness of it and was entirely unable to focus on what message the cards were attempting to convey. Another fail. This bed was too soft.

My last attempt netted me a startling result. The Book of Kaos is an indie created and printed deck, from an artist in Australia. It took me close to three months and a chain of emails just to get the deck to me. It was such an aggravation, in fact, that when the deck finally got to me I plunked it into my desk drawer with the rest of my "maybe I'll touch these in the next six months" decks and promptly forgot about it. Sort of. It kinda festered in the back of my mind, if I'm honest, and I didn't want that energy residue adversely influencing my relationship with the deck and the artwork, otherwise I may as well just pass it on to someone else.

This spread is called a Character Profile, done for a fictional character by the name of Cirrus Marcson-Orsanna, who was highlighted in my International Tarot Day short story for Strength in June. While the character was one I'd been mulling over for some time, it wasn't one I'd given serious thought to fleshing out until he just imposed himself into a scene.

The interpretive imagery is fascinating. It is at once stark and detailed, in a way that encourages me to focus without losing me in the spectrum. The people are alive and expressive, unique individuals for the language in their stances and forms, beyond the idiosyncrasies of their attire or style.

Reading the spread offered me fascinating insight into a character whose motives and psyche I knew very little about beforehand. It was like being the psychologist in a therapy session with a new patient. Like the couch you've had forever that everyone falls asleep on, inevitably--this bed was just right.

It could just be that this was the correct combination of spread and deck. I'd suspect mindset played a role, but this collection of spreads was done over the course of a few weeks, not all in one day. The Book of Kaos is a deck I will certainly be pulling out and returning to more often than originally intended, now that formal introductions are out of the way.

To explore the other participating bloggers in this month's Tarot Rebels Blog Hop, please click the link below. 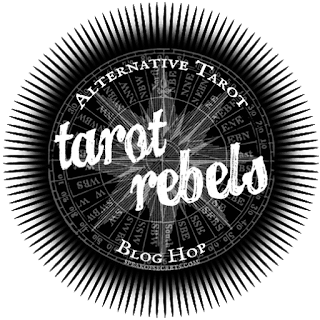 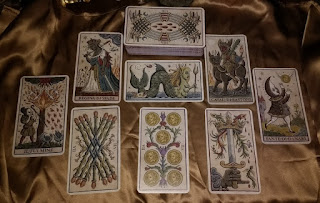