February 21, 2017
One of my favorite parts of creating the world in Piaffe revolved around the insigni. I'll admit that my inspiration was born in Vienna, Austria at the Spanish Riding School where, at the age of five, I had the pleasure of straddling the back of a Lipizzaner mare. She was huge. Enormous. Fluid.

Exploring the abilities of the mundane horse, the years of training required to perform complex maneuvers which the Spanish Riding School teaches, and extrapolating the possibilities of combining those with a sharp intellect and an aware mind, led to the evolution of the equine soldier.

There are some things that simply must be seen to understand fully, that no words can truly describe. Some would say that as a writer, it is sacrilege for me to utter such a thing, that it speaks only to my inadequacies. I say, they've not truly experienced and appreciated firsthand something as moving as this.

The first few minutes of this video seem mundane. I recall a description of dressage as "watching cement sit" which is, I'll admit, a sadly accurate description for anyone who doesn't understand what they're seeing, and sometimes even for those of us who do. These stallions make it look so effortless, moving in near synchronous steps at such close proximity, that it's easy to forget how difficult it is to do these seemingly simple things. Somewhere in the neighborhood of 9:24 in the above video, they begin performing in-hand and under-saddle above ground movements. It gives you an idea of the muscular development, athleticism, and intelligence required to execute these movements.

It's like watching the US Marine Corps Silent Drill Team (link to a video). They do all these precise movements, smoothly, flawlessly, synchronously, and they make it look easy. I found a video, for comparison and contrast, of a dressage performance of Pas de Trois, three Holsteiners and riders moving in unison. They don't get it perfect, but sometimes they come really close and it's stunning. But look how much space they keep between them, at the third horse who at one point just says, "I've had enough of this shit, I'm fucking done," and breaks stride, starts bucking and humping, and it's no wonder they kept such a distance between the three of them. Language and communication are what horsemanship is about, and when those break down, what you have is an animal capable of hurting you that has a reduced inclination to give any fucks because you're talking and not listening and that's not how communication works.

So here's how it does work. This is how I see an insignis moving.

There's such power and control in every movement this horse makes. Watching this video, which I've done countless times, I get so wrapped up watching him move that I forget the rider is even there. That's what communication is supposed to be. There's no gritting the bit or curling the upper lip because the mouth's clamped shut. What this stallion is doing, he enjoys every step of. You can feel it in his exuberance and energy. That's what an insignis looks like. 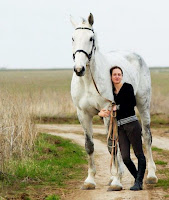 Now imagine one large enough to make the ground shake with every stride. Half a dozen moving in unison would make a vibration you could feel. An above ground movement by a horse this size would take your head clean off. As someone who's been the target of an adult horse kicking with force and intent, I can tell you this beast right here would do more than put you on the ground a dozen feet away.
They aren't just big the way many draft breeds are; they're tall, with the leg length and muscle control to do real damage, to move fast and strike hard. After trolling through more pics of horses than I've ever thought I'd see, the Percheron is the closest I can find to what an insignis resembles.
They're still a tad on the short side though. So, not yet done growing.

In case you missed it, yesterday's post was about the main characters you meet in the first two chapters. (No spoilers!)
Next on the release week celebration itinerary: the manda groves.

The Dark Arcana tarot playing cards. Aprils' Tarot Rebels Blog Hop is about the Make Or Break cards in a deck. The volatile relationships we have with archetypes are what shapes our intuitive responses to the imagery we experience in the tarot deck. For me, there have always been a few cards that have the power to make me totally fall in love with a deck -- or completely kill any chance of me being able to work with it. They're also the archetypes I struggle with most in my personal life and spiritual journey. The Emperor is the first. It's a card of Fire, of harsh rulership, of intellect and logical detachment. While those are theoretically aspects to which I relate well internally, it's the external that I have difficulty relating. And so the attitude, body language, and presentation of this dominant persona is crucial. It's like putting my finger against the thrumming pulse of the deck as it tightens its fist. This is its hard side, and if presented t